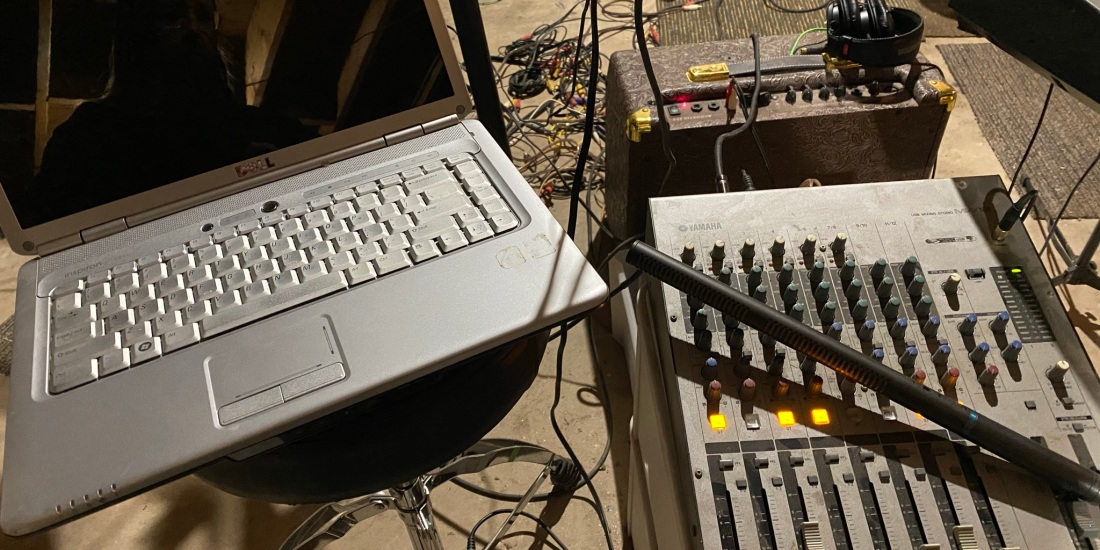 Being a technology geek with a high-level audio background, it’s tempting for me to want to get some real equipment in order to record these books on LibriVox. On the other hand, not having disposable income to put into microphones, interfaces and WhisperBooths is a sobering reality check. And, after all, that’s what reality checks are supposed to do, right? Rather than invest up front, I am approaching this whole Voice over Work thing as a self-funding operation. I am fortunate to have enough equipment, and of sufficient quality, to make some beginning recordings that sound a bit better than Thomas Edison’s “Mary Had a Little Lamb,” but I am certainly not THX certified. Here’s what I have to produce my stuff:

This microphone is actually mounted on a tripod stand that I pulled out of my old photo equipment. Of course, the threads on photo tripods don’t match up with the threads on a mic holder (which doesn’t really matter, because I don’t actually have mic holder anyway), so I am using an old elastic band to hold the mic in place, carefully held in stasis by balancing the front heavy mic with the XLR cable on the back end! By sliding the mic back and forth in the elastic band, I can control the angle of the mic to point it up to my mouth.

So, you are asking, if you have made it this far, what is the point of all this rambling? This is where, as a savvy blogger, I employ cyclicality to bring you back to the headline, which is to say, just get started with what you have. True, I did steal the headline from a church meeting years ago, but it still applies. I didn’t spend much money to cobble together this setup, although my background and my junk pile both gave a pretty good push in that direction.

So, if you want to try out this voice acting stuff, give it a shot. But I suggest not investing too much in it until you figure out if you have the desire to keep going. I don’t know if I do or not, but I am working on figuring that part out. More later.