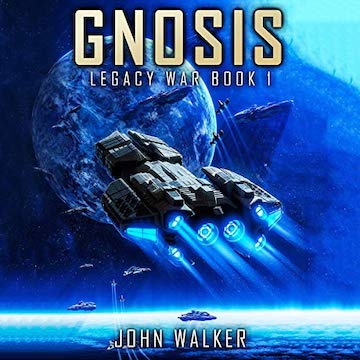 But for the SciFi fans reading, several new titles across different series by John Walker have been released on Audible.

Captain Warren Miller and the crew of the Leviathan return home triumphant from their first mission amongst the stars. They bring with them hope from the religious cathedral world and look toward the future.

As the threat of war looms over Earth, they can’t be sure when the enemy will return or how long they have. In their goal to find additional allies, they plot a course for Lantha station, social hub of the Border Dukes, a semi-independent group that currently operates outside the mandates of the royal empire. Here, they hope to find potential friends against the royal military.

While they are still under the radar, they must act fast to bolster their defenses. The force behind the throne works to consolidate power while hunting for threats outside their borders. As a famed military commander begins to defy the throne, he becomes the object of search for numerous parties. His death or salvation may turn the tide of an upcoming war.©2019 John Walker (P)2019 Whoami Publishing

Technology has allowed humanity to take to the stars. Earth’s first step toward exploring the unknown universe begins with a surge of hope, followed by the sting of a surprise attack. Just as their most advanced ship embarks on its maiden voyage, aliens assault the unprepared fleet, making a play for an ancient technology the human race has relied upon for all major advances.

This sudden meeting proves humans are not the only sentient beings in the vastness of space, and it quickly becomes clear they will need to thwart the plans of their new enemies. If they do not, our first foray into the unknown could well be our last.©2018 John Walker (P)2019 Whoami Publishing